After a difficult day on Friday, we decided to spend Saturday exploring, and this time we chose a town we’ve been to many times and its neighbor that we’ve visited only once before – Sayulita and San Pancho (also known as San Francisco).

Sayulita is known as the Surfer/Artsy/Hippy town in the area.  At least it’s known as that by me.  Our first challenge was actually getting into the town.  The main road in and out of Sayulita is currently under construction – so we were directed to take the detour.  I think it might have been wise to make the detour actually drivable before shutting down the main road.  Azulita almost didn’t make it through……

Now that October has arrived, along with the imminent invasion of tourists, this town has come alive.  Every tiny space has been turned into a store, a gallery or a restaurant.  Some of these shops showcase legitimate artistic endeavors – paintings and sculptures and a LOT of jewelry.  The majority offer the same junk you will find in the market in Bucerias but displayed in artsy ways so you are almost tricked into paying the double or triple cost.  Normally we spend a lot of time on the beach in this town – watching dozens of surfers try to find waves.  But on this day we chose to wander up and down the streets – starting at the center plaza where we ate a fantastic breakfast on the upstairs balcony of Chocobananas.  From there we walked up and down the streets that extended from this center core, looking for unique finds and snapping pictures of the murals painted on every building.  As in every town in Mexico, safety is not the first concern and as I came around a corner I walked face first into a concrete ledge housing some nasty art project.  Exploring is slightly less enjoyable with a bleeding tongue and goose egg on the head – but what are you going to do really? 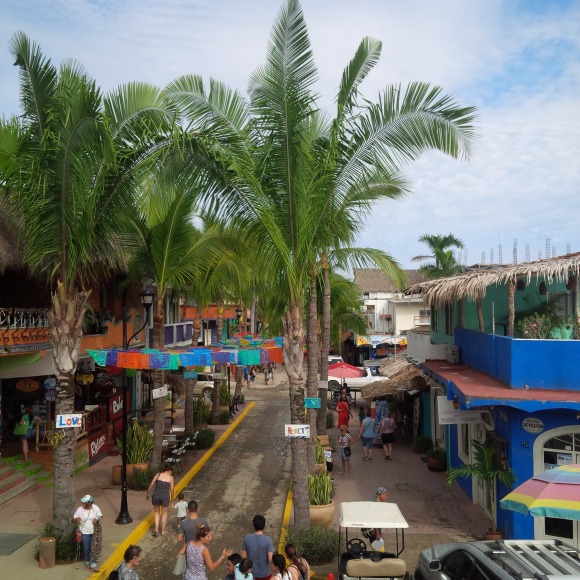 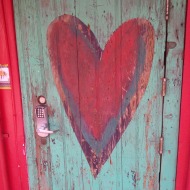 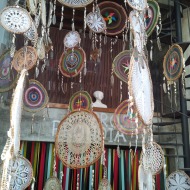 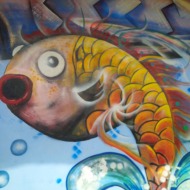 Sayulita really has the best food – definitely the best fish and shrimp tacos around.  But how about these Tacos de Cabeza?  Head tacos – and just to make sure you are clear on what you are getting they itemize the ingredients:  lips, tongues, palates, eyes, brains, gizzards, cheeks. 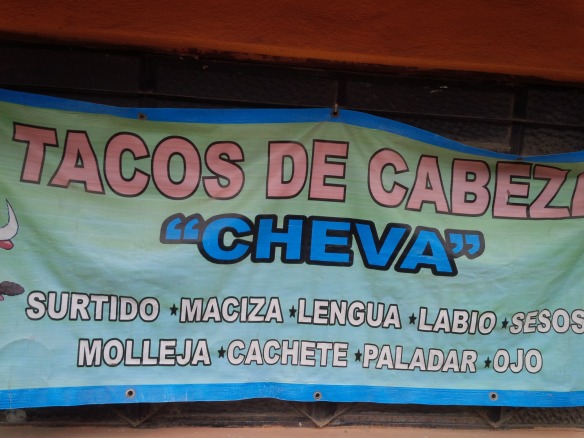 After the congestion from dreadlocks, tattoos and gringos became too much, we headed to the next town of San Pancho, which is also called San Francisco – a Sayulita wanna-be with a much slower pace.

As you come into this town, one of the first signs you see is a giant traffic sign reminding you that there are new traffic laws in town – please obey them.  The main change seems to be a ‘one-way’ traffic system that makes absolutely no sense – and only about ½ the drivers were obeying.  The street into town is one-way, but to get out of town you have to go through a hilarious maze, following the one way arrows that are hidden on the sides of buildings.  When I yelled out the window at one Mexican man, asking him where we should go, he directed me just to go the wrong way down the main street back out of town.  It appears the new laws are not really going over so well with the locals.

On the way home, we stopped at a gas station for a drink and while Grant was inside the store, I stayed in the car.  A ‘helpful’ window wiper salesman approached me and began to tell me why I really needed new windshield wipers.  Now because I had already fallen victim to this scam once this month, I watched him very carefully and sure enough, he started showing me that my wipers were torn and proceeded to tear it himself.  He was probably shocked when I yelled at him to back away from the wipers – I was having none of it this time and he retreated quickly.

I think the thing I am learning here is that when you step outside what is comfortable and familiar, and embrace the unknown and unexpected, you feel everything more fully.   The pain has been deeper, but so has the pleasure.  Embracing each moment means observing everything around me in a new and interesting way.  Sometimes – like on Friday – that brings tears.  Other times – like on Saturday – it brings laughter and wonder and even the occasional bump on the noggin.  Either way, it is good to live fully, even when driving into the unknown, and we are having a blast! 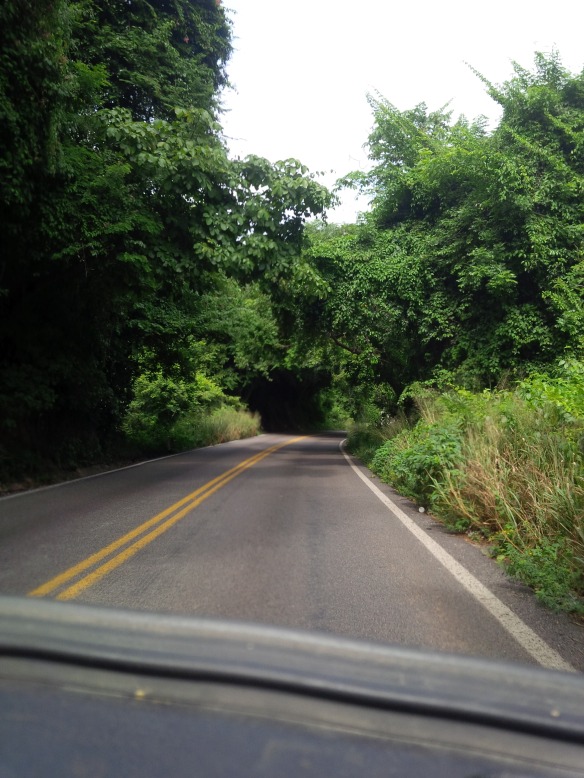 1 thought on “A Weekend Bump on the Head”