This is an update my husband Grant wrote to tell you about our trip with Gael to Guadalajara – another one of ‘those days’!

2 hours into our drive and the sun is just rising

As you probably read last week, we recently took a trip to visit the implant doctor and his team in Guadalajara, excited to take the next steps in this journey.  Our team on the ground here in Mexico, made up of myself and Karen (English/some Spanish), Francisco (bilingual), Gael (charade and hand signal language) his mother Mariela (only Spanish) and Laura his Manos mama ( only Spanish) left  home a little before 5 am and traveled to Guadalajara, arriving at the doctors’ offices in the hospital a little after 10:00 am.  We met the surgeon and team leader Dr. Hector Macias and discussed the process and what would be required for the final testing.  And then the challenges began—how could we not have expected challenges?

The first test we were expecting was an MRI, but we were informed that the MRI machine at the hospital was out of service and we would need to go to a private clinic—and would it be ok as the cost there was going to be over $9000 pesos?  We of course agreed, but then found out there was no availability that day—we would need to return on Monday.   Sigh.

We then met with Dra. Cynthia who was to do a computerized brain scan to test Gael’s brain for its ability to process sound.  Things then got difficult—Gael refused to sit still and wear the head phones required.  No amount of convincing by Laura or Mariela was effective.  We were told then that the test would need to be done on him sleeping and were given sleeping pills for that purpose.  Of course he refused to take them, so we then slipped the contents into a juice bottle to give him when he was unsuspecting.   Dra. Cynthia told us she was leaving at 2:00 so he would have to be asleep by 1:30 if the test was to be performed. 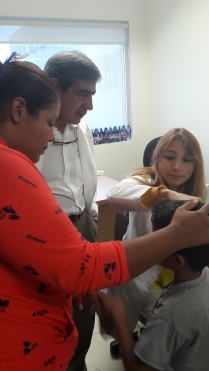 The third important task of the day was for Gael’s mom and Laura to meet with the psychologists who would assess the caregivers and ask questions about Gael.  We should at least be able to do that right?

Francisco and I took Gael outside to run around for awhile and see if we could tire him out.  We went back inside and as we waited for the psychologists appointment Gael fell asleep in his mom’s arms.  Great—we had time!  As Laura and Mariela were called into the psychologist’s office,  Karen, Francisco and myself attempted to carry Gael through the busy hospital, down to a different floor in hopes he would sleep through the  brain testing.

Of course, 1/2 way to the testing office, Gael woke up and nothing could get him back to sleep.  We chose a quiet spot in the waiting area in hopes Gael would go back to sleep—but in typical Gael style, he did not want to miss a thing.  He just stared around and watched all the activity going on around,  yawning non-stop.

In the meantime, Francisco got on the phone with doctors in Puerto Vallarta to see about an MRI there—could we avoid doing this whole trip again on Monday?  Yes—we could get one for around $3600 pesos and Dr. Macias agreed that was an acceptable option.

Meanwhile, Laura and Mariel had their interviews and came to find us.  They told us that the psychologists wanted to meet with Gael, but because he was not there with them during their appointment,  the doctors had gone home and we would have to come back on Monday at for Gael to be assessed.  Sigh again.  He absolutely could have been meeting with them since he had no intention of sleeping at all but who knew they wanted to meet with him?

Later, Dra Cynthia came by and after much conversation between her, some of her associates and Francisco she took us all back to her office to see if Gael would agree to wear a hearing aid.  They had decided that this was now going to be a requirement before an implant to ensure that he was willing to have any type of device on.  Seeing his resistance to wearing a headphone earlier had worried us all—what if he just refused this whole process?   By this time Gael had already had a melt down and was adamant that he was not interested in having another bad experience with a hearing aid.  He had had a bad experience a few months ago with Dr. Austin of Starkey when a hearing aid that was turned too loud was placed on his one ear that hears low frequencies, and the loud noise badly scared him…. (probably the first really loud sound he had heard in his life!)  So a long winded conversation occurred between the Dra.  and the mothers,  Karen and Francisco adding input.   During this time the hearing aid was passed around, everyone putting it in their ear, big smiles and thumbs up in hopes Gael could get past his fear and put the hearing aid on.  After a long time he did so, and then he liked it.  In fact he loved it!  He packed it in the little box and indicated he was talking it home.  By now all doctors involved were gone home, and Dra Cynthia was also anxious to leave.    We were given the hearing aid to take home, and told that Gael needed to wear it for a month to see if he would cooperate.   We can have the brain test done in a month—and we can get it done in Tepic if we choose. 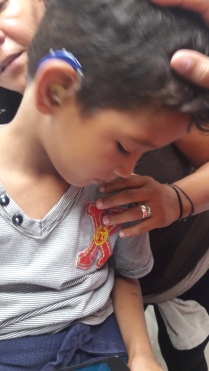 I admit we left the hospital pretty discouraged.  We had driven 5 hours through mountain roads and were going home with no MRI done, no brain test done, no completed psychological assessment.   Most importantly, no surgery date chosen.

So now we regroup, schedule an MRI locally, and reschedule the brain testing and psychological assessment for Gael.  All as soon as possible.  We also continue sign language training which has helped immensely in Gael’s ability to communicate, and according to his kindergarten teaching has done wonders for his behavioral issues.  We also will look for ways to get Gael more comfortable with a hearing aid and using headphones so he will return to being cooperative when we do the brain assessment.

Gael is still willingly wearing his aid – a good predictor of future success!

Or, we make a plan that involves keeping him up all night so he will sleep through the testing procedure with minimum sleeping pills.  At the time of posting this update Gael has been wearing the hearing aid ever since arriving home, and he loves that it is blue.

We realize that this is a very long journey for Gael and those who consider themselves his friends.  Hearing will open up a whole new world for him,  but he is currently 5 years behind his peers in hearing/speaking and in developing certain cognitive/emotional skills.  School will continue to be a very difficult experience and probably will require additional supports that we are currently looking into.  Experiencing a single-mom family situation provides further challenges.  The ultimate question remains the same: what can we do for one of God’s precious little ones—give him the very best we can.  Stay tuned.

About Karen moves to Mexico

I am a Canadian woman - a mom and wife and Non Profit Executive - who is ready for a new adventure living in Mexico. My husband and I are not ready to retire but we are ready to embark on a journey of change and growth and service in a country far from home. This is my story of what it's like to prepare for the craziest move of my life!
View all posts by Karen moves to Mexico →
This entry was posted in Gael's Gift of Hearing, Uncategorized, Volunteering in Mexico and tagged cochlear implant, living in mexico, Moving to Mexico, Volunteering in Mexico. Bookmark the permalink.

1 Response to Gael Goes to Guadalajara