This was a sad week for Jose and his family – and it broke my heart too.  Every Friday Grant and I drive 6 year old Jose home to spend the weekend with his family in San Vicente.  He lives with his mom and his 6 siblings and his nephew and 2 nieces.  His grandma and aunties have come from the state of Michoacán and have been living 3 blocks away for the past few months.

On Sunday I received a message on Messenger from 13 year old Isabel.  Although she no longer lives at Manos de Amor, I hear from her almost every day.  “Hello Karen – what are you doing today?”.  I value the relationship we have built with this family.  But the message I received on Sunday was not just chit chat with a bored teenager.  She told me her abuelita – her grandma – had died.   Oh no.  We had just visited with Grandma the week before when she had been caring for a sick Jose.  She had not been sick then – but apparently a sudden pneumonia had taken her.  We were set to pick up Jose later that evening and I asked what they needed – should I still get Jose?  Would they keep him with family, would he attend a funeral?

In Mexico, funerals often happen very quickly – within 36 hours.  There is no embalming, no waiting for many days for family to travel.  There is a wake the first night with a viewing of the body and some type of funeral or gathering the next day.  I received a message later that afternoon asking me to come get Jose at 7:00 as usual.  In Canada it is normal to bring food to a grieving family – and I knew that it would be even more important to do the same here in Mexico.   There is no extra food in the fridge to feed visiting relatives.  So we stopped at the grocery store and bought 4 roasted chickens and some rice and beans and headed out to get Jose, not knowing what to expect.

When we arrived it was quiet at the house -and 12 year old Laurentino told us all of the family had gone to Michoacán – his mom, most of his siblings, his nieces and nephews and aunties and uncles.  He and 13 year old Isabel were left at home and Jose would be going with us to Casa Hogar.  He did not know how long they would all be gone.   I was so glad we had brought the food as there was none in the house and the two children were there alone – under the watchful eye of a neighbor who I knew probably did not have extra food for 2 more.

Jose seemed stoic – he walked out of the house and climbed into my car without a word.  I talked to Laurentino for a while – told him to contact me if he needed anything – and drove Jose back to the orphanage.  As soon as we walked into the home, Jose’s damn broke.  He started crying- deep sobbing.  For over an hour I sat on the couch holding this little guy in my arms while he cried and asked for his mama.  I have seen Jose angry, happy, mischievious – but I have never seen such sadness and pain from him.  He cried and I cried and told him “Today I am your mommy Jose.  It is okay”.  After an hour or so I laid Jose on the couch and left.  Laura, the night worker, said he could sleep with her.  I was heartbroken leaving him but I knew he needed a good night’s sleep.

The next morning I arrived at Manos de Amor and as soon as Jose spotted me he ran up to me and said to me (in Spanish of course) “Karen, last night I was crying because my Grandma died  – I’m ok now”.  I smiled and said “I know Jose – you were sad.  It will be okay.  Your Grandma is with Jesus now”.  His serious little face, “No Karen – my Grandma is in Michoacán”. 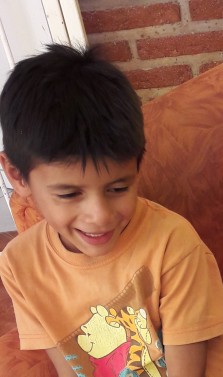 So Jose will be okay.  Sometimes it is healthy to cry hard – not just for Grandma but for a missing mama, for a hungry weekend, for nieces and nephews who are born to 13 year old moms, for one room homes in cardboard towns, for all that is hard in his young life.  Today I watched him laugh as hard as he cried on Sunday and I smiled with him –  Jose will be okay and we are so happy to be part of his story.