Let’s face it.  One of the main reasons – maybe the primary reason? – people vacation in Mexico is because of the food.  Yes, the weather is perfect, the beaches and mountains are breathtaking, the people are welcoming, the culture is exciting.  But the food – well the food is amazing and addicting in both its simplicity and its complexity.  It’s generally just some kind of meat flavored with chile in a tortilla, but the flavors and the spices and the sauces come together to create heaven.

For as long as I’ve lived, I’ve loved to eat – but I’ve never really loved to cook.  I’m too clumsy and too easily distracted.  Inevitably shortly after I begin, my computer whispers to me that there just might be a super important email waiting (Is Publisher’s Clearing House Lottery even a thing anymore?)  and before I can download and delete, I smell the burning.

But recently I have been thinking it’s time for a change.  For a few reasons:

So this week I got the urge to cook some Mexican dishes. From scratch.  If I am going to do it, if I’m actually going to cook, I need to make it a fun part of our new life experience.  No lasagna, no meatloaf, no pot roast – nope I’m going Mexican!

I started by thumbing through the Mexican cookbooks I had accumulated.  (I’m so weird – for someone who hates cooking, I love to collect cookbooks) and then went shopping.  I was determined to buy everything I could at the small local shops and stands in my neighborhood.  I read about the different types of chiles – red and green, fresh and dried – but when I got to my neighborhood fruteria, they all looked the same to me.  But I did it.  For less than $20 I loaded up my basket and headed home to spend an entire day in the kitchen.  I toasted peppers, I grilled peppers, I peeled and seeded and blended peppers.  I soaked beans and boiled beans and mashed beans.   I roasted and shredded a giant chicken and made a huge pot of chicken broth.  I chopped a LOT of onions and minced many cloves of garlic.  I boiled and blended tomatillas and tomatoes.  When it was all done, I had a big pot of refried beans, a container of salsa verde (green sauce) and a container of red enchilada sauce.  I had enough shredded chicken to make dinner for many nights.  And of course, I had guacamole. 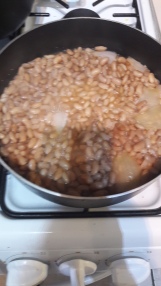 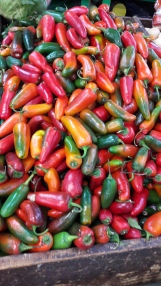 Last night we had red enchiladas and I have to say they were delicious.  Grant said they were the best he had ever had.  Not sure if that’s true, but HE SAID IT and that’s enough for me.  Tonight, the green enchiladas – pretty good too.  Both served with a bowl of guacamole and some refried beans.  And a salad.  Enough left to try a few other things this weekend.

As you are probably guessing, it wasn’t all successful.  My first round of beans was a FAIL – I blame the computer and the stupid stove.  Grant blames my basic lack of attention to the pot that had boiled dry.  Whatever.  The poblano peppers that were on their way to being stuffed hit the garbage can after tearing in half.  Meh.  That won’t discourage me.  My oven dial does not have degrees on it – it has numbers 1 through 5.  Took me a while to figure out that just past 2 is 350.  That’s dumb.  But I’ll keep trying.  I think we’ll head to the fish store next and try some seafood dishes – how about a nice grilled red snapper? Some ceviche? Some giant shrimp rubbed with the left over chile paste?  Obviously some fish tacos with chipotle sauce.

But that’s on the weekend.  I think tomorrow night we’ll head over to California Pizza for some Chicken Tequila Fettuccine – I’m exhausted and craving some Italian!

1 thought on “It’s Really All About the Food”