It’s the last week of school here in Banderas Bay and that means it’s Graduation season.  Just as it has in Canada, Graduation has spread to every level and we were invited to a Kindergarten (Kinder) grad as well as to a Sixth grade grad (Sexto).  We were honored to be included in both of these important days with these students and their families.

On Tuesday, we accompanied the three Manos de Amor Kinder students – Gigi, Geraldine and Jose – to their ceremony.  We picked up the prince and the two princesses in our chariot and headed to the school.

When we arrived, there was standing room only and we found ourselves a spot right at the back.  That’s when it got hilarious.  One of the teachers – perhaps she was the principal – came to us and asked, “Were you invited here for the ceremony?”.  Not quite sure what she was getting at, we said yes and she told us we needed to sit at the front.  We thought perhaps we were standing in an off-limit area, so we followed her to the front before we realized that she was leading us to two empty seats at the head table.  I tried saying “No, there must be a mistake” but it was too late – the program was starting and she indicated we needed to sit in those chairs.  Somehow, we had been mistaken for some expected VIPs.  She had me write our names down and we were introduced and asked to stand – to great applause.  We couldn’t actually understand the introduction except for the part where they thanked us for all our help.  Huh?  For the next 2 hours, we sat there like celebrities, handing out the graduation certificates and the parent awards.  We shook hands.  We stood for the Mexican National Anthem – notice in the picture that we are the only ones not saluting.  That was rectified with one sharp elbow to Grant’s side.  After the ceremony, the woman who had been leading the ceremony thanked us profusely.  We graciously accepted her thanks.  Eventually they will realize that we were just two old gringos who were celebrating like all the rest of the parents but for those long 2 hours we had the best seats in the house! 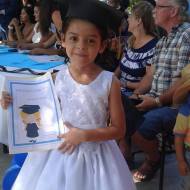 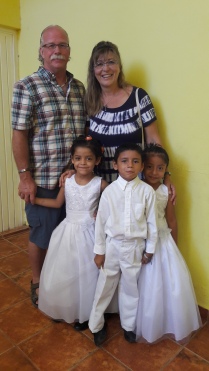 On Tuesday afternoon, we attended our second Graduation party – this time for Samuel who was graduating from Primeria (primary school) and heading into Secondaria (high school).  Samuel is the son of Norma who used to work at Manos de Amor and the nephew of Veronica the director.  Again, we were honored to be included in this family celebration – with Anna’s delicious birria.  We had to leave early to teach our English classes and sadly missed the Karaoke! 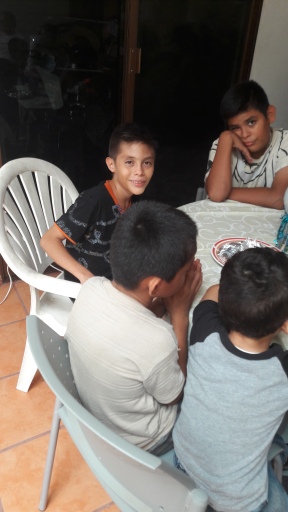 On Wednesday, we went to nearby San Vicente to attend the 6th Grade graduation of Isabel and Laurentino.  This time we were asked to be the Padrinas, which are similar to Godparents.  In Mexico, children will have many different adults throughout their lives who will be considered supporters or mentors.  At important milestones such as baptisms, graduations, even weddings –  families choose madrinas and padrinas to stand alongside the children to show love and support for them.    At the graduation ceremony, we each sat behind our graduate and walked with them to the front to get their diploma. I love the symbolism of that – we support from behind, we walk alongside.    I admit I looked around today – the only white English speakers in attendance – and wondered what on earth we are doing here – with this very poor community, with this family, with the orphanage, with Mexico in general.  Maybe this is it – we are offering love and support and encouragement from behind, walking alongside our newfound friends as they find their own way.   When the ceremony was over, we told Isabel and Laurentino that if they finish High School, we will help them fund university.  I am giving you fair warning – it’s a few years off but I will be asking for your help when that day comes! 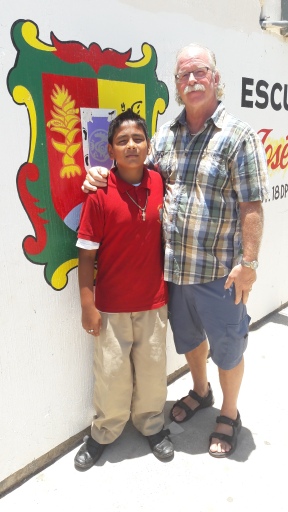 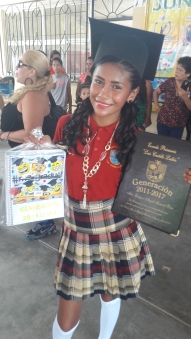 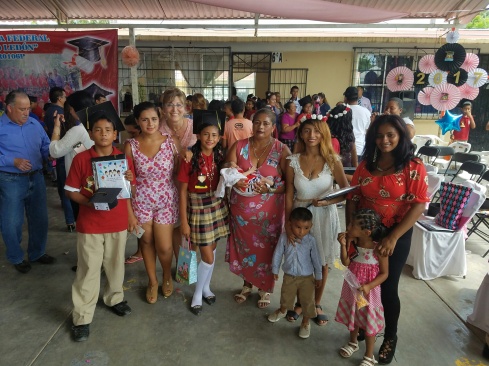 So this was a good week of graduation and celebration.  Milestones.  Accomplishments. Hope.  Future.  In so many ways the odds are against these children but for this week we dream and we celebrate.  FELICIDADES ALUMNOS!