One thing Mexico has is lots of critters – some good, some not so good.  We have met only a very few of them, but I’d like to introduce you to some who have visited us.

As always, Grant attracts all kinds of cute creatures – they just love him.  So we’ve met a LOT of kitties and dogs.  Of course, what is cute during the day is a sleep hazard at night.  So it is a bit of a love/hate relationship with each animal we see.   It is never really clear if these animals have a home and just choose to avoid it or if these animals are strays. 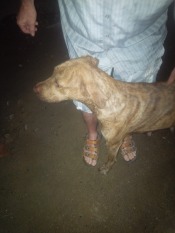 These animals live in our neighborhood and roam the streets like an inner city gang.  They clearly believe this is their hood and who are we to argue?

These are the things I am not so keen on – especially in my home or yard.  But they were here first and I am trying to come to a negotiated space agreement.

We have only had a couple of these cucarachas – and I have purchased all manner of traps and spray to keep it that way.  They run faster than the wind and are giant.  Giving them their own very popular Mexican song seems ridiculous to me.  Gross. 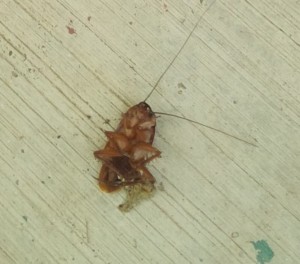 Spiders of every shape and size are around – but we have only seen a couple in our yard.  So far so good.

Tiny geckos can be seen running up walls and trees.   Geckos have the same place in the lizard family as kittens do in the wild cat family.  They are the cute version of scary critters.  This little guy was living in our guest shower for a while and although it always made me scream when I saw something scurry out of the corner of my eye, I was okay with sharing the bathroom with him.  The guy on the right was just hanging out (literally) at a nearby outdoor restaurant.  Better than the wasp infested lights we have up North!

Yesterday I was not so keen on sharing my space with this guy I saw sitting on the wall in our garden.  Every time I came outside, I heard something run behind the fence so I figured it was a cat.  Not so.  If you look up on the wall you will see this black lizard looking down on us.  He was pretty shy and really just wanted to get some sun.  So I gave him lots of warning (coughs, door slamming, yelling) before going outside. 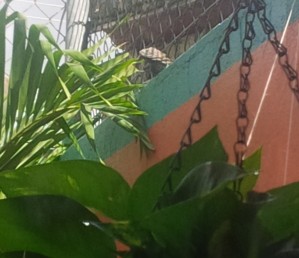 My explanation to Grant was “I don’t like the black lizards.  But I’m okay with the green ones – they’re not as scary.  Who doesn’t like Iggy Iguana?”.  No sooner had I spoken these words then I went out my front door and what do I see climbing up on my window sill? Yup – a big green one.  And it turns out I don’t like them either.  This poor guy had an injured tail – probably a dog bite – so he wasn’t moving too fast and just wanted a place to recover.  He sat on the ledge for 24 hours and when he finally moved this afternoon it was just to go a few feet further into the garage, nestled amongst the lawn chairs.  Hoping he moves on tomorrow – I’m thinking of a Sunday picnic which means I’m going to need those chairs. 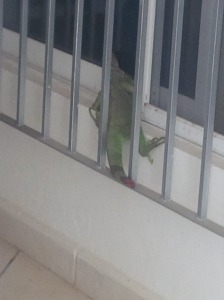 So those are the critters we’ve met so far.  There are also some amazing colorful birds and butterflies and a hummingbird who visited.   Haven’t met any snakes or scorpions but I know they’re out there waiting to introduce themselves at the right moment.